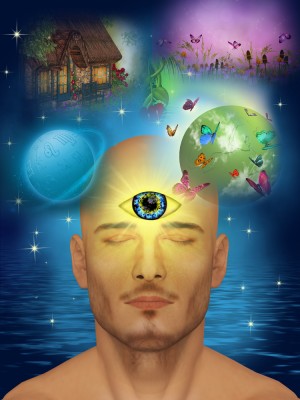 Each of us has the power to not just perceive the Universe only through our limited senses but go beyond our usual limits by accessing the parapsychological powers buried in us. You will be surprised to know that we just have to learn how to get parapsychological powers by following the right paths. One needs to have sincerity and an open mind, by developing a positive attitude, and an intention of doing good.

Only the great beings (saints, sorcerers, mages, wise men …) reach an almost total control of all the parapsychic possibilities.

Hindu mythology and history are replete with people who were clairvoyants. It is said that in Mahabharatha, Pandu’s second wife’s son, Sahadeva had the gift of clairvoyance. He knew the future and the result of the war with the Kaurava’s but never revealed it to anyone. Sahadeva managed his clairvoyance with honesty. He knew about the most horrible experiences which will come upon the Pandavas, his brothers and his wife, but he never could reveal them to anyone.

You may be called to this kind of destiny. However, honesty and experience mean that in reality most clairvoyants only develop one or a few psychic powers. Which is moreover sufficient to succeed in its existence.

For some, it will be the prediction of the future; for others, leaving the physical body, magnetism, telepathy, for still others psychic healing …

The development of each psychic power is already a taking initiation in itself and its full expression, the fruit of diligent practice. Indeed, it is not enough to develop an extrasensory faculty, it is also necessary to practice it with motivation and a disinterested state of mind.

If one of your motivations is to make a living with your parapsychological gifts, it is entirely possible, but that should not be your primary motivation. This does not mean that you will not be able to live one day but that you should not embark on an initiatory process with the objective of lucre and luxury. In other words: do not start the discovery of your psychic powers by thinking of earning money or making it your source of income. Selflessly cultivate them first and you may one day be able to live on them!

Know how to limit yourself!

It is advisable, at first, to choose the extrasensory faculty which attracts you the most and, after a certain practice of this one, to launch out in the discovery of another of them.

Sometimes you will be content with only one parapsychic discipline because it will completely fill you. You can also later develop a middle way of cultivating two, three, four … other psychic powers. This advice is given only to present you the various possibilities available to you throughout your initiatory study of this work. They are not lavished on you to limit you but to “limit” you! Find your own way knowing that you have many opportunities to perceive the world. Your land journey is necessarily original and personal. No one can live it for you. You will choose, as you progress, the path you prefer to follow … by developing one or more extrasensory faculties. Do not set yourself a priori psychic limits. Trust yourself.

In addition – this is, unfortunately, a “detail” not often mentioned in most of the methods – the practice of para-psychic powers strengthens and improves the state of physical and mental health. By accessing all the resources of your conscious and unconscious, you strengthen your mind by gaining complete control. You thus arrive at a vision of subtle worlds much larger and rich in possibilities than our visible material universe.

Taking into account the influence of the body on the mind, through extrapsychic practice, for example, creating dream interpretation, you automatically strengthen your physique and you give yourself the mental and physical means to develop it and to protect yourself from most diseases.

This property, recognized from time immemorial by the spiritual sciences, is increasingly recognized by modern science. In particular in the field of psychosomatic diseases based on the principle of the influence of mental states on the development of diseases.

The main physical consequences of extra-sensory practice are the improvement of the physical and moral state, the alleviation of pain or even their total disappearance. This parapsychological discipline even automatically participates in the healing of physical or mental conditions! In addition, gradually, you gain access to higher mental states, other perceptions of the higher worlds and your inner universes. You are then better able to improve your existence sustainably and truly.

Remember that the possibility of accessing the fullness of all parapsychic powers cannot be excluded, even if it is very difficult to access. Anything is possible if you want to and put into action the mental state and the actions necessary to achieve it.

This process begins with mental mastery.

Indeed, if you already think that something is impossible, how do you want to materialize it on the terrestrial plane? Do not set yourself a priori any mental limitation and do not rule out any hypothesis, even the most fanciful or the most impractical at first sight.

This is the state of mind of great men and great inventors of all time.

If all great men limited themselves to the worldview of their contemporaries, they would never realize their discoveries!

If in their time, the inventors of the printing press, the aeroplane, the submarine, the telephone, the television, the Internet … were satisfied with the current conception of the world in their time and had not been to the end of their ideas, they would never have realized their inventions!

Adopt the attitude of these great men and embark on the search for your psychic powers with this mentality! Do not give yourself any psychological restraint, because it is entirely possible to develop your extrasensory faculties, provided you believe it!

You are not the first but you are the only one!

If you still doubt the possibility of developing your psychic powers, know that many humans have done so before you since the beginning of time. The secret teaching that is given to you here does not come out of thin air. It is the result of long years and even centuries of transmission and experience.

You benefit from the work and the achievements of the many masters and disciples who practised these methods experienced them before you and adapted them to the spirit of their contemporaries.

If we exclude the masters (but why would you not become one day? You must not close yourself to any possibility!), The development of parapsychic powers and techniques does not necessarily require to be of superior intelligence or ‘a high intellectual level! Many people who now use their parapsychological faculties on a daily basis are even very simple people who have never had higher education. So, believe it or not, whatever your personal situation, why wouldn’t you do it too!

Others have done it before you for centuries and so have many of your contemporaries. No doubt you come across them in the street without noticing. They use them to succeed in their lives. All this without flaunting it and with the discretion that befits advanced people who have nothing to prove to anyone. They know the value of their powers and sometimes even use them without the knowledge of the people they are helping, without seeking any recognition whatsoever, through proud and self-confident people.