Europe, the world’s second-smallest continent is home to about 11% of the world’s population. Between the 16th and 20th centuries, European nations controlled at various times the Americas, most of Africa, Oceania, and large portions of Asia. Unfortunately, both World Wars were largely focused upon Europe, greatly contributing to a decline in Western European dominance in world affairs by the mid-20th century as the United States and Soviet Union took prominence. Despite its fall and relative low prominence post the 1950s the “old continent” has still maintained an aura around its charm and beauty. Whether it be the iPad generation of today or baby boomer era of the 1960s, Europe has always managed to captivate the attention of visitors, tourists and students from outside the continent.

Acceptable credence to any observation can easily be claimed by assessing the influence of popular media around it. The fascination around backpacking Europe and soaking oneself in its cultural elements has been depicted on film for as long as 40 years. The 1969 classic If It’s Tuesday, This Must Be Belgium, showcased the concept of “packaged” European tours, where the nonplused tourists are expected to rush from one landmark to another. Says Emma Cope, who reviewed the film for IMDB,

I was 14 when this film came out. It is a funny one about a bunch of American tourists on one of those whirlwind bus tours of Europe. But it must have planted a seed in me, because at 22, I saved all my wages and went to Europe to see it myself!!

Now that’s a sight you can find every year in Europe during the summer months from June – September. Thousands of youngsters from all around the world still save up and take a break from their normal lives to travel and have fun in Europe, a concept that was popularized on film with the hugely successful comedy Euro Trip.

Post September 2008 (till present) however the opportunities and resources to indulge and enjoy life were restricted to a lucky few as the world entered a global recession which is only getting worse by the day. Europe in particular is on the verge of a major economic collapse as it battles to resolve the sovereign debt crisis which has now ballooned to enormous proportions. The reason everyone is freaking out now is that while some eurozone countries are relatively sound from an economic standpoint, other countries are way over-leveraged, meaning they have too much debt relative to the size of their economies. And the troubles of a few countries could end up affecting everyone, yoked together under one currency for the last decade — even though their economies functioned according to different habits and enjoyed very different degrees of financial health.

Portugal, Ireland, Italy, Greece and Spain — gathered under the unfortunate acronym PIIGS — are some of the most highly leveraged eurozone countries, and most people think that if a disaster happens, it will start with one of them. The UK and France are also at risk but not in a panic zone yet. This economic mess is worrying not only because it has the potential to impact many countries of the world and affect many lives, but also because it has a direct affect on the youth and the future of our society. Today, unemployment rates among the PIIGS is mind-numbingly high touching 24%, 21% and 15% in Spain, Greece and Portugal respectively. A large proportion of this unemployment is among the under-25 population, which is either in college or fresh out of college. 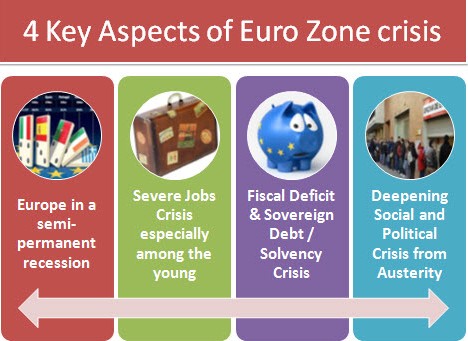 One industry that stands to be greatly affected from the Eurozone crisis is education. When the global financial crisis hit in 2008, it looked at first as if many European universities were going to escape the worst. Higher education has long been considered a public right and a taxpayer-financed obligation, and there was optimism that universities, which government leaders hail as drivers of economic growth, would emerge relatively unscathed. Four years in, that is no longer the case. With governments facing unyielding international pressure to reduce deficits by curbing public spending, universities in Britain, Greece, Ireland, Italy, Spain, and Portugal are suffering from their most painful cuts in decades. European universities, which on average rely on public money for nearly 75 percent of their finances, are wrestling with hiring freezes, rising tuition, and declines in campus services.

Despite the uncertainty, there is little doubt that along with United States of America, countries of Western Europe are the most developed when it comes to education. In particular UK, France, Netherlands, Germany, Switzerland and Spain are home to some of the finest universities in the world such as Oxford, Cambridge, Erasmus, University of St. Gallen etc. Recession or not, these universities and many other specialized schools will always find favor among international students, more so from the developing economies of India and Asia. This intuitive notion is also supported by hard data from UNESCO which indicates a constant upward trend in the number of Indian students pursuing higher education in Europe from 2000 to 2009. 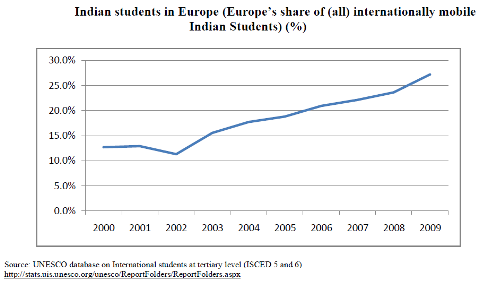 As someone quite familiar with the Indian culture and society, its easy to predict one of the specializations that Indian students seek while choosing to pursue higher education in Europe. A European MBA from a good school is rated highly within Indian society both at social and professional stratas. Its no joke but given the high prevalence of arranged marriages in India, having an MBA from a good business school is also known to help find suitable partners for marriage (to learn more read MBA in India).

To the question – “Amid the doom and gloom does it still make sense to pursue higher education in Europe or a European MBA?” The answer is: it depends! Even in the current climate, there are still plenty of examples of Indian nationals who have used an MBA from a European school to go on to great roles in leading firms or start their own companies in the â€œold continentâ€. For e.g.: Debarshi Das graduated from the full-time MBA at Franceâ€™s EMLYON in 2010. With a first degree in Chemical Engineering and experience in IT consulting firms like Tata Consultancy Services and Thomson Reuters, he pursued the MBA to switch out of IT. Post MBA he joined as Senior Business Analyst at medical devices firm Abbott Vascular in Belgium.

One major challenge for non-Europeans to break into a job market other than the UK, is the language barrier. While English is the global language of business, in practice you need a decent knowledge of the local language to land a job in France, Germany or Spain. Another point to note is that thereâ€™s a shortage of people with an engineering background in Europe in general, and the UK in particular. If you have a first degree in engineering, supplemented with an MBA, itâ€™s a great combination to land a job in project management, analysis or operations.

To put things into perspective though, the goal of pursuing higher education at foreign shores should first and foremost be to learn and grow. Building an international network, learning about a new culture, traveling with a diverse group of friends etc are some of the things one can experience while pursuing higher education in Europe. It is true that to recoup the cost of the education it is important to find a job in the same market and one must give it their best shot while always having a good “Plan B” in place. Lets hope things get better for Europe as soon as they can and the global economy sees some happier times in the future.

Note: This is a guest post by Maria Ahmed, Editor at BusinessBecause.com â€“ a professional network for business students, helping you make connections before, during and after your MBA. On BusinessBecause youâ€™ll find useful information on MBA rankings, MBA jobs, and fresh daily editorial such as the Why MBA? series.