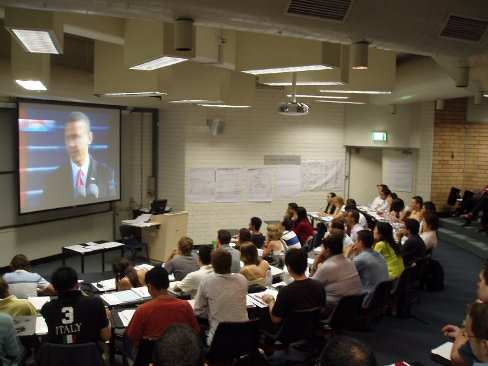 21st January, 2009(Sydney Time) was a historic day for the United States of America and for world in general. It was the day when Barack Hussein Obama stepped in to become the country’s first ever Black President. His road to victory in itself was quite remarkable and very few people in the world could have ever predicted that such a man would ever become POTUS.

Over here at the Australian Graduate School Of Management a bunch of 65 odd global citizens and future global leaders were busy dissecting the Obama speech to discover the qualities of a good Manager/Leader. Obama without a doubt is an excellent orator and speaker and packs such a force when he speaks that it’s hard not to feel emotional at the end. We watched the 15 minutes + of his acceptance speech and came up with the following qualities that must be present in a global leader,

The above are just a small subset of the numerous qualities that the class came up with and it’s amazing to see that while Obama does not have a lot of political experience, people still expect him to have most of the qualities mentioned above, just because he is able to portray some of them effectively. What do you think are some of the essential qualities that a global leader must have ? Share them with us.