Ah, the weekend is here again. The only time of the week to relax, chill or go out, visit friends, visit places and in general do things leisurely. In most places of the world the working week is from Monday To Friday with Saturday and Sunday being holidays. However there is some variance with regards to this in the middle-east. For instance, most middle east-countries including Saudi Arabia, Algeria and Kuwait have a working week from Saturday to Wednesday with Thursday and Friday being off-days. However in Egypt, Syria and the UAE the working week is from Sunday to Thursday. So if you’re in one of these places you’re really gonna miss “Saturday Nights“.

Well, this weekend we’ve got something really suited for the young,single and eligible bachelor, a species that is most certainly the most widespread. So what are the factors that would influence the decision of young bachelor to move to another city. Well let’s see, level of development, public transport, cost of living, leisure and entertainment, drinking age, etc, etc and at some level the kind of women. After all who wouldn’t like to move to a city that is not only well-developed but also has an excellent male-female ratio with some really good looking and easy to talk to girls.

Recently a survey was done to find out the top cities of the world having the most beautiful women where the results were determined by: Quality of women, Male to Female ratio and Ease of talking to women. Let’s have a look at what the top 5 cities are:

Take a trip across the streets of Amsterdam (check the exclusive DP Travel Coverage here) and you’ll find so many beautiful women cycling across the streets. The women of Amsterdam and dutch women in general are naturally beautiful and very Independent. They usually make nice home-makers and are known be better in relationships as compared to their other european counterparts. 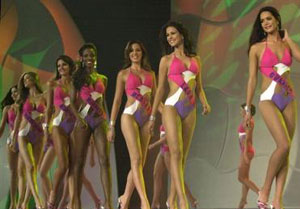 There’s something about this developing latin american country that just amazes you. It’s a well known fact that Venezuela has won the maximum number of Miss World and Miss Universe pageants and has a thriving beauty industry. The women here take great pride in their appearance. Regardless of their socio-economic status, it is estimated that Venezuelans spend one fifth of their disposable income on beauty products, a startling statistic for a country in which 80 percent of its population lives below the poverty line. A study conducted by Roper Starch Worldwide revealed that 65 percent of Venezuelan women think about their looks “all the time,” in contrast to the 27 percent of American women in the same category.

In Caracasâ€™s shanty towns, jumping over puddles in sloping alleys of clapboard houses, high-heeled women in tight low-waist jeans work their way to the bus stop. A mixture of Amazonian Indian, African, and European blood has created a race that, although subtle to the foreign eye, is quite exotic. As women pass by, men will compliment them and unlike most countries of the world these compliments are well received and are followed by a hug or a thank you. Someone we met also told us that turning 18 years old is something that all girls look forward to in this country, because at this age the girls father usually gives a major beauty enhancing gift to the daughter.

Now this is surely a place worth visiting for the young and eligible bachelor. Checkout our exclusive feature on the beauty economy in Venezuela here

Venezuela, Brazil along with Argentina form the trio of Latin American countries which boast of an extremely attractive female species. The women of Buenos Aires are naturally beautiful and every women in Buenos Aires is a model waiting to be found. The parties are legendary and the clubs and events are overloaded with beautiful, approachable, and fun women.

No wonder that Argentinian men are masters at flirting and consider it to be a part of their culture.

Finally the Scandinavians have the kind of looks that most people can just dream of, Tall people with blonde hair and blue eyes. Scandinavian women are one of the most approachable, educated and friendly women in the world and the sex ratio is also extremely good in these countries. Definitely a must visit place for the eligible bachelor.

While the countries listed above definitely score on the ratio and ease of talking factors which is the criteria on which the survey is based on, it must be said that all countries of the world have good-looking women and in general women are always beautiful in one way or the other.