It is a well-known fact that the best way to grab attention is to do something different. So the past few years have seen a number of television channels resort to different techniques to market themselves, the most popular amongst these beings on-screen fighting and harsh judgements on reality shows like Indian Idol, Voice Of India and in the American context shows like America’s Next Top Model, Girlicious and others. While these methods of marketing do have an impact on the audiences (with some Indian News Channels going to the extent of showing them on their news segments) there are not ethical by any standards and are a poor form of marketing.

The best way to market a brand is do something fun, innovative and at times wacky. So when the Mozilla Corporation wanted to market the latest and highly improved version of their browser, FireFox -3 they decided to do it by creating a record. June 17, 2008 would be remembered as Download Day, a new term coined by the Firefox team which placed itself in the record books by inventing a new category called “Most Downloaded software in 24 hours“.

The Download day website states “Thanks to the support of the always amazing Mozilla community, we now hold a Guinness World Record for the most software downloaded in 24 hours. From 18:16 UTC on June 17, 2008 to 18:16 UTC on June 18, 2008, 8,002,530 people downloaded Firefox 3 and are now enjoying a safer, smarter and better Web“. Now isn’t that an amazing way to market your brand, just go ahead and create a wacky record which would involve your end-users who ultimately decide the fate of your product.

Firefox 3 is certainly a brilliant browser and is much better than IE-7 which like all microsoft products has severe stability issues, so it’s no wonder that people were really looking forward to using Firefox 3, something which the Mozilla corporation was quite aware of. Well, it’s always fun to be a part of a record and so we’re really proud to show off our certificate of the same (see below).

So if you’re really fed up and sick of Internet Explorer and are looking out for something better, it’s time you tried Firefox-3. It’s fun,highly customizable and secure. Also you can play more than 2,500 Nintendo games and relive your days as a child by downloading the Firenes extension for firefox. Now that’s a great browser. 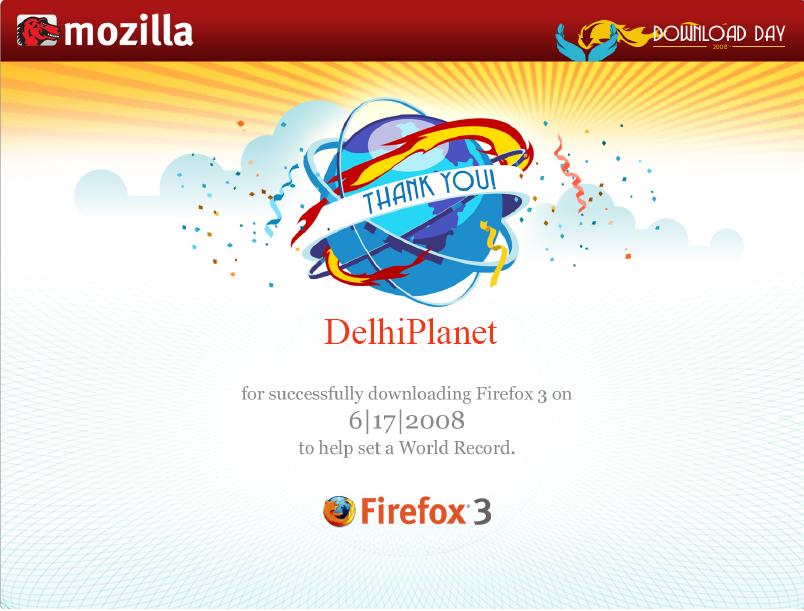 Looking to explore a career in Cybersecurity?