Not really,this might just be true in a few years. The Iran government has plans to bring to life an idea which till now resided only in the minds of millions of men across the globe,the only minus point is, that no male would be allowed anywhere close to this island. 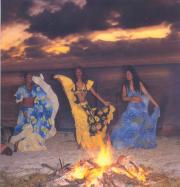 The Times Of India reports that “Iran is seeking to create a paradise for female tourists by turning an island on a northwestern lake into male-free zone.All public transport, restaurants and facilities on the island on the gigantic Oroumiyeh lake close to the Turkish border will be staffed only by women, officials said. The island of Arezou (Wish), one of the 102 islands in the Oroumiyeh Lake, will be equipped especially for women.The construction of hotels, small restaurants and medical centres under the management of women is one of the specifications for this island, which is the first such in the country. The initiative has even been cleared by supreme leader Ayatollah Ali Khamenei’s provincial representative, who declared that a women-only island is not against Islamic sharia law .

This development would certainly be a boon for many females in Iran and other countries of the middle east.Women in these countries are strictly forbidden from roaming around unveiled and any disobedience is treated very harshly. So much so that a male doctor/surgeon is forbidden from directly looking at certain body parts of a female even if he is required to do so.In such a scenario he is only allowed to look at the mirror image of the organ. Well if the gulf countries can’t change the law then they can surely take some steps to improve the life of their women folk,who inspite of being very attractive and beautiful,still remain unknown to the world.

For all you guys out there,don’t even think of taking a chance at this place. If caught, your punishment could range from cutting off your arms to stoning or even death. You can surely do much better in the great world of your imagination.